Certain people are always offering stale advice like “Do what you love and you will never work a day in your life.” Pretty easy blather to throw out, when even most popular singers and movie stars end up working more for the money than for love of their material. However, hopefully there is a point in life for most people where they feel like what they are doing is for a larger benefit than personal applause or maintenance of a family, as worthy as those may be. Some say that kind of work has “psychic benefits.” At that point the product you present takes on a newer, higher, better life. You are not seen as just “trying to make a buck,” but appear be making the world a better place.

I arrived at that point somewhere in the CPR saga around 1982. All of the political bridges had been crossed: if it could be done, let’s do it. So we did it and proved it and the Pittsburgh Health Sciences Group (one of the top in the nation) made an excellent study of the effectiveness of this CPR system compared to standard live instruction. 33% more effective. And the Long Island Rescue establishment tested it and said that because the CPR Learning System created such a high standard, firefighters who tested on that CPR system had to qualify only once in two years rather than every year . And the Canadian Armed Forces bought our second system.

The CPR Learning System, with its hands-on simulation of a heart attack victim, started to win random media awards, because nothing close to it existed to show the possibilities of interactive training and testing. Thus it started to get written about. Shortly thereafter, I spoke at education conferences at Harvard and computer software conferences at M.I.T. The U. S. Congress’ Office of Technology Assessment was heavily influenced by Harvard and M.I.T., and on their say-so put the CPR System up for Congressional Testimony to show the possibility of such leading edge medical certification.

For all of the interest, it was not feasible to drag the whole system – manikin, computer, display screens — to every show, but I was fortunate to have done it on a few early trips. Luckily, a few news agencies generated  excellent quick stories that I could could show with high credibility.  For instance, when I showed the system to a Congressional committee on New Technology, a CBS news crew was next door in the Sam Rayburn congressional hearing room for the Abortion hearings. They were trying like mad to find a visual angle to describe that dilemma, and a few of them wandered over at 9:30 to see this me — in a suit, on my knees on the floor — hooking up a manikin to a computer for the 10 o’clock session.

Instantly the CBS  news producer saw that our CPR simulator was going to be a visual story. They quickly got permission to tape my appearance with the system rather than slog through the Abortion hearings. Ordinary people cannot believe the whirlwind efficiency of these national TV camera crews, large cameras being placed, close ups taken of the screens for later editing in, cables rolling out around me to all corners of the room. It dawned on me that this had a history, that theaters clear from Shakespeare’s time had employed sailors to handle all the rigging of the curtains, just as they had sails in commerce and war and exploring the world. Now the ropes were cables and the sailors were TV crew, and rather than travel the world on explorations, what they explored here with their cameras would be going out across the world. Diane Sawyer made it a feature story on her evening newscast. (Just let Diane Sawyer do the talking….)

What lay underneath these public forays was the need to find someone to take this orphan on. I was made the Director of Advanced Technology Development for the American Heart Association, and now I had to find a secure home for this phenom.  I wrote a patent on it, but someone had to fund commercial development and sell it to the public. Someone had to continue testing and publicity and all of those things a glittering new project needs to sustain itself past the first “Wows.” The AHA could not run a small business – or so they were advised – and so we had to find a business partner to carry the CPR System forward. My dual purpose, then, was as an evangelist for this kind of interactive simulation learning, and as a rainmaker to keep the project from dying prematurely. That meant hitting the conference circuits while the invitations were hot. Popularity Based Marketing, for lack of a better term.

I remember when American Airlines put the CBS story (about the CPR system in Congress hearings) with their short subjects preceding the inflight movie. I was living in Dallas, but I would get calls from drunk friends across the country who had been on coast-to-coast flights and awakened to see me in front of their faces. That footage also came in handy when I was giving keynote talks in faraway places, but did not want to travel with the whole shebang. After the Congress show I almost never took the Resusci-Annie manikin, because the airlines wanted to charge for an extra seat, or extravagant onboard shipping which would cost almost as much, with those heavy crates. Diane Sawyer’s short news story was enough to show gist of the system, but people wanted to see a bit of the real thing. Enter the baby…

Luckily, we did have an Infant Resuscitation model and I could carry this Resusci-Baby and an Apple II computer in my baggage, along with hookups for TV monitors. I needed to show how the manikin interacted with the computer through a special serial card to give instant feedback on the monitor, so we made a dedicated program just to demonstrate how the sensors from parts of the baby gave feedback that you would see on the screen as a computer graphic. The baby created some special challenges for us, since you could hold its small body in your hands to do some of the rescue work. When it had an Airway Obstruction, for instance, you were supposed to have the head down and feet up and to gingerly slap its back to free the airway obstruction. (A Hiemlich maneuver would, of course, injure this small a person.)

To sense this Airway Obstruction maneuver, the computer had to know the baby’s position in space, and whether its back had been slapped just enough to dislodge any obstruction, but not so much as to hurt the child. The computer could sense this impact. We had much of the positioning of the baby sensed by a series of mercury switches, which sloshed around in a circle when the baby’s head was down correctly. However, believe it or not, one of the main problems we came up with was how to end of the lifesaving procedure, when all the moves had been made and breathing had been restored and the little heart (with air puffs pulsing through its artificial veins) was beating just fine. A happy ending doesn’t just happen by magic…

Then what? How do you clear the screen and start over? We thought of adding a button. On the light pen touch screen (full model) you just touched a box that said “Quit.” But with this traveling model we needed a quick and easy way to start over and let interested spectators try a little hands on after the presentation. We tortured with how to do this, and then one afternoon it became obvious — to someone I think was the janitor. He was cleaning up and watching us go through our mental gyrations, and just blurted: “Shake the baby.”

Of course, Shake the Baby…and the program starts over. A lot of people who saw the demo in public thought that was — AHA! — a brilliant and elegant solution. Some cell phones’ flashlight features start now by shaking and it is probably the same kind of mercury switch. To think: this slightly awesome feature of smartphones today may have actually come from a bystander 30 years ago seeing us Shake the Baby to clear the screen.  Conference attendees talked as if we must been geniuses. Little did they know.

As I’ve mentioned, this traveling setup called for me to carry a videotape clip of the whole system (thanks to Diane Sawyer), plus the Apple II computer and the actual baby manikin. It was always possible to have a monitor or screen provided wherever I spoke, if their A/V people could follow specifications, and there were only a few emergencies there.  And then there was me carrying my baby in a suitcase… 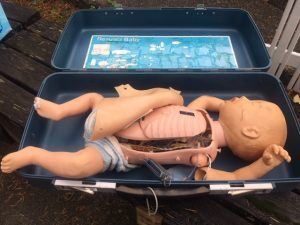 Possibly the most fun on almost every trip was carrying the baby in a suitcase, setting the case on the conveyor belt, and watching the eyes of the security people when the X-ray displayed its contents. In many cities, the security guards pulled me aside to open the case for them, and a few times they called for backup, I guess in case I was a serial pedophile killer. Some security guys in San Francisco slammed me against a wall and began frisking me, causing the person standing in line behind me to say, “Wish I’d said that.”

I actually began to look forward to that return part of each trip. Visiting each new city brought forth a new set of reactions: some unique like nearly falling from a chair, some vocal (Holy…this or that), some clandestine like pushing a red emergency button with a straight face, and quite often gathering other security personnel to make a group decision on what to do about this threat. However, as they say, you can go to the well too often.

And then there was Dallas, where I lived and worked for the American Heart Association. Leaving on one trip to New York, with my practiced nonchalance I placed the suitcase containing the baby manikin on the conveyor belt. And watched out of the corner of my eye for it to appear onscreen, and, hopefully, disturb the tranquility of this routine job. A black security lady was on top of it. And me. In a very laid-back manner she said “Is them things wires, or veins?”

She smiled, not quite the Mona Lisa wryness. “Well that’s OK, we just don’t want any of those bombs with wires in them going through here.”